The human foreskin is a specialized bi-layer tissue.
If it were unfolded to lie flat, it would take up 14 square inches (90 square cm) and have a butterfly shape. 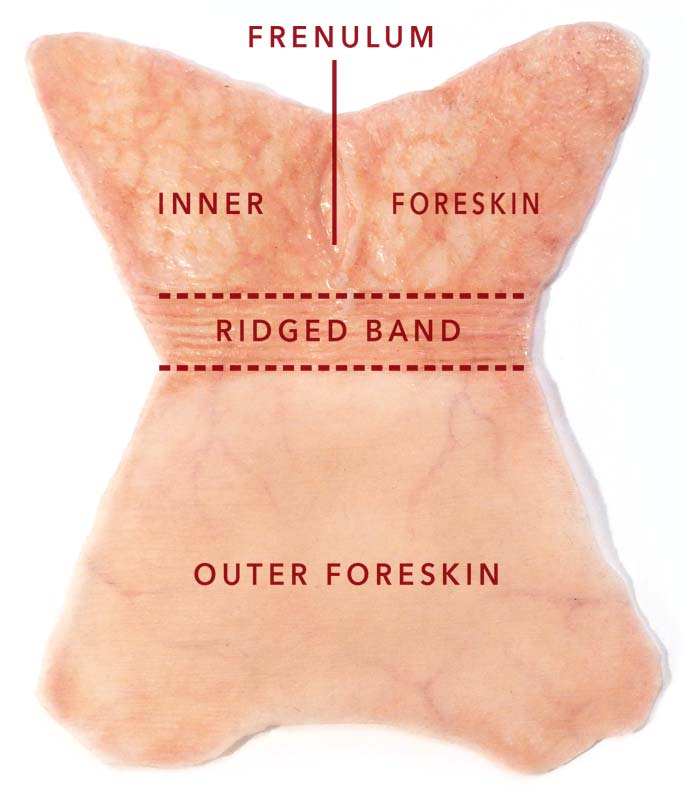 An essential continuation of the shaft skin, the outer foreskin protects the glans penis, retains sexual fluids, and maintains sensitivity so it is ever-ready to respond to stimuli. It acts as a roller-gliding bearing to mitigate friction and prevent painful intercourse.

The inner foreskin is smooth mucosal tissue much like the inside of the mouth. Packed with nerve endings, it is designed to stimulate the glans penis. The inner foreskin detects subtle variations in pressure, temperature, stretching, and texture.

A primary erogenous zone of the male body, the ridged, or frenar, band is highly specialized and exquisitely sensitive. As designed by nature, the soft ridges equip the foreskin to stimulate the female inner labia and G-spot during intercourse. Ribbed condoms attempt to mimic this unique structure.

Another primary erogenous zone of the male body, the V-shaped frenulum on the underside of the head of the penis tethers the ridged band to the glans penis and is extremely innervated. It contains vascular structures to ensure proper blood flow.The highly sensitive frenulum is often referenced in scientific sexual health literature

Understanding the Foreskin's Complexity and Shape
Far more than just a ‘flap of skin’, the foreskin is highly vascularized and innervated, serving several important biological functions including blood flow and sensation. A cross-sectional artist’s rendering of the human penis and foreskin in its natural state, details the complexity.
The unfolded foreskin’s butterfly shape and bi-layer nature are clarified in the photos below. The sequence begins with a circumcised penis and unfolded foreskin and ends with an intact one, as designed by nature. 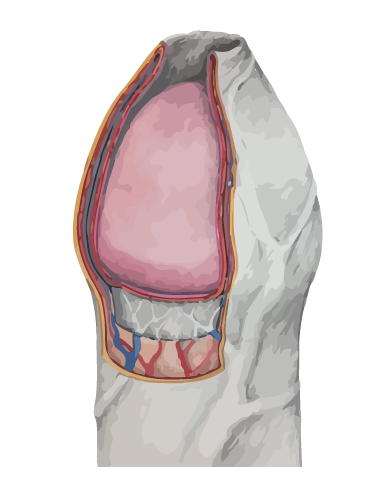 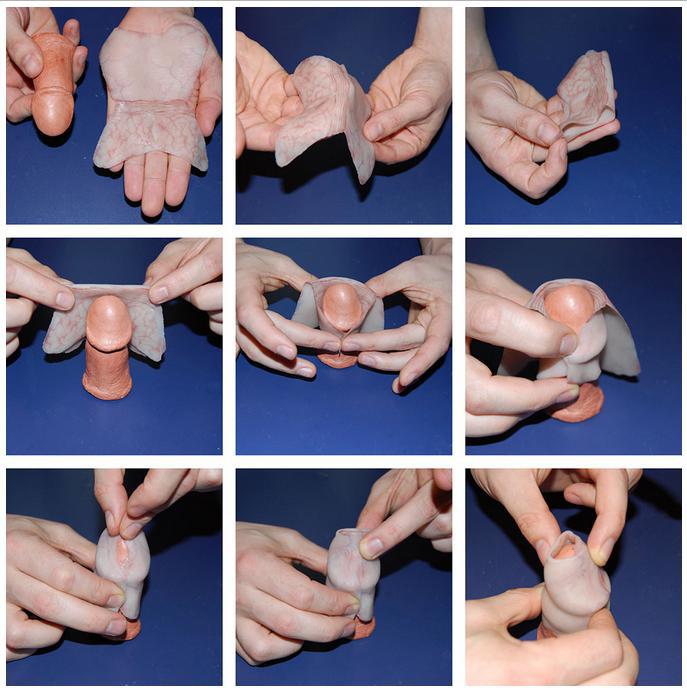 Our founder, Vincenzo Aiello, demonstrates how the HuFo
is folded in one minute Foregen's goal is full regeneration of the foreskin.

What does it do?

The foreskin is a purposeful, integral part of a man’s body. As designed by nature, the foreskin serves six distinct functions.

The foreskin fully covers the glans, or head, of the flaccid penis, protecting it from harsh rubbing against clothing and damage while maintaining sensitivity.

The foreskin maintains interactive contact with the sensitive glans during sexual activity and provides direct stimulation.

The mucous membrane of the foreskin provides an environment that lubricates the glans to enhance sensitivity.

Much sexual pleasure is derived directly from the foreskin, as it contains the highest concentration of nerve endings on the penis.

The foreskin secretes anti-microbial agents, including Langerhans cells, which can help destroy HIV as well as keep the glans clean.

The foreskin facilitates the necessary gliding and expansion of skin on the penile shaft and glans, providing for natural sensations and retaining lubricating fluids during intercourse.

Foregen aims to restore the foreskin's biological functions and benefits.

Why does it matter?

Foreskin functions, psychological and emotional well-being, ethics, and the promise of regenerative medicine.

A Natural Fully Functioning Part of the
Male Body
‍

‍The foreskin is not a birth defect or accident. It is not expendable tissue with little or no function or benefits. The fully intact foreskin is nature’s default setting and normal appearance—an idea that may seem foreign to those from societies where circumcision is common or even routine. Its functions are similar to other mucous membranes in the body like eyelids, lips, or female clitoral hood, which covers and protects the clitoris and maintains lubrication.

The foreskin’s four distinct features work together as intended by nature and serve six important and distinctive purposes. It is not only a physical part of the male genitalia, but the foreskin also provides sexual pleasure, which has both physical and psychological implications.

Tens of thousands of men have contacted Foregen to disclose personal stories about the psychological and emotional distress they suffer from having a vital part of their genitalia and sexuality taken away. Circumcised men report feeling disempowered or helpless. Most often, that choice was unethically made for them, without their consent as infants or young children. The damage is lifelong.  And, it is not only themselves, but also their family members, partners, and significant others who are affected by their loss.

Foregen’s goal is to reclaim the choice that was taken away and reverse the damage. Through regenerative medicine, Foregen aims to empower men by restoring psychological, emotional, and physical wholeness as nature intended. Foregen is hope and wholeness.

Bodily Integrity and the Ethical Problem of Circumcision

As designed by nature, every boy is born with a foreskin—a protective, complex covering over the tip of the penis. Circumcision is the permanent, surgical removal of the foreskin covering the glans, or head of the penis.

Only an autonomous person can consent to a procedure that permanently alters healthy tissue. Non-consensual and/or uninformed circumcision is therefore an infringement of bodily integrity that violates a person’s human rights.

Like any healthy, functioning tissue or part of the body, the foreskin should not be removed without the fully-informed consent of the individual involved or without sound medical reason. The practice of circumcision must be considered from an ethical lens, especially when a person is unable to consent to a procedure that modifies the body.

The Potential of Tissue Engineering

As the world’s only foreskin regeneration research organization, Foregen aims to fully regenerate the human foreskin and restore 100% of the biological structures, functions, and benefits lost to circumcision. For men who wish to regain a whole body, the procedure will recreate the natural appearance of the penis, keep the glans in its proper protective lubricated environment, and remove scarring caused by circumcision.

State-of-the-art advances in human tissue engineering and regenerative medicine have paved the way for this objective and clearly demonstrated the feasibility of Foregen’s goals. Also, many victims suffering from the effects of botched circumcisions may also benefit from Foregen’s proposed procedure. Utilizing tissue engineering science, Foregen plans to address the needs of all men impacted by a variety of damage resulting from their circumcision.

The Human Foreskin (HuFo):
Putting it All Together

Using the highly detailed foreskin sculpture he created, Foregen’s founder clearly and passionately explains the important role of the foreskin for protection and sexual pleasure, what is lost to circumcision, and the hope for regeneration. 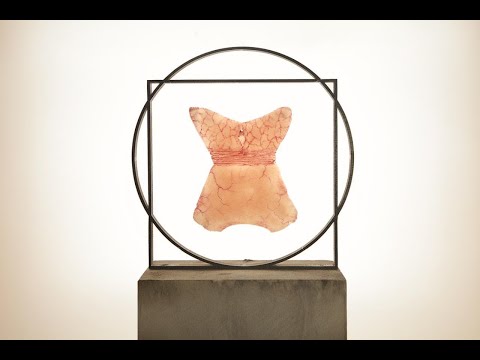