Foregen was brought into existence by its founders’ desire to harness regenerative medicine’s amazing advances over the last fifteen years. Under certain circumstances, dermal replacement techniques can now restore original tissue to those who have lost it.

Below is a brief explanation in layman’s terms of the process of regeneration - for more complete information on the science of regeneration, follow the links that are embedded throughout this page.

For an even faster overview, here’s a quick video (3 minutes) on regeneration.

Regeneration is the ability of the body to regrow tissue when it is lost by trauma, disease, or other misadventure. The most famous example of this is the salamander, which can reproduce whole arms, legs, tails, and other body parts within days following their amputation. Salamanders are, however, not the only creatures with such powers - humans have them naturally as well (at least for a time) while developing in the womb. If a developing baby loses a finger or another of its extremities, it simply grows it back without forming scar tissue. Indeed, very young neonatal babies can sometimes do the same if injured shortly after being born. Even in adults, kidneys and livers retain some of this regenerative capacity when they are damaged.

Aside from our kidneys and livers, why can’t humans regenerate as adults? 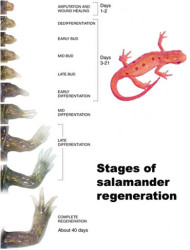 While we don’t know fully why we cannot regenerate after birth, existing theories may shed some light on the issue.

One theory is that stopping the regenerative process is critical to allow a much more powerful survival aid to take its place: scarring. A scar allows a wound to seal quickly, thus preventing death from infection or loss of blood. In evolutionary terms, the ability to scar helped our ancestors survive. Put simply, for primitive man there was little benefit in having a body that regenerated an amputated arm (which takes months) if, in the meantime, he bled to death. Survival by scarring was, therefore, a critical step forward in evolutionary terms, not just for man but for all mammals.

Scarring is not without costs, however. First, scar tissue inhibits any new regrowth by regeneration; and secondly, scar tissue is inherently different from the normal tissue that once was there (as anyone with a scar will know), both in appearance and in function. It stops us from dying when wounded, but is useful for little else functionally.

In that case, how is it possible to regenerate now that we are adults?

That is the question to which biomedical research has devoted itself for many years. Fortunately, we now have some answers. The first is the discovery that the unique DNA structure present in every cell represents (among other things) a blueprint or map of our whole body, not just information relevant to that cell.  This blueprint organizes the body’s growth in the womb by telling cells what comes next in the growth process. This body map is created in the very first cell we have and remains constant throughout our lives, unaltered even if our body becomes wounded, damaged, or amputated in some way. As such, when we are wounded, our body still has a record of what should have been there, a record that regenerative medicine uses to have the body remake itself.

The second key is learning how to stop scarring from happening. When we are wounded, our body automatically instructs the cells at the wound site to form scar tissue. As stated above, this function was of importance to evolution but marked the end of natural regeneration in our body. Regenerative medical techniques have shown that it is possible to turn off that instruction from the brain and instead send a new instruction to wound site cells  to regrow what was taken away, using the blueprint present in our DNA, just as if the body were still in the womb.

How do we induce regeneration from our DNA?

There are two critical elements in regeneration: stem cells and the extra-cellular matrix or ECM. Of course, you have heard of stem cells. Traditionally, stem cells were derived from aborted fetuses, which is why so much controversy surrounded them. Recently, scientists discovered a simple method to revert adult skin cells back to embryonic stem cells. This is a feat that cannot be overstated. The less familiar term, the extra-cellular matrix, is also a necessary component for regenerating tissues. The ECM can be thought of as the skeleton for a tissue. It provides an attachment point for cells and gives structures their three-dimensionality. It also facilitates cell-to-cell communication and stem cell differentiation as well as providing the necessary vascularity to nourish cells and remove waste. When implanted correctly in the human body, the ECM prompts the surrounding cells to repair the tissue instead of creating inflammation and scar tissue. The ECM can be engineered, usually with a 3D printer, or obtained by stripping the cells of a donated tissue with specialized detergents. (To read more about the current progress of bioprinting, click here)

The standard practice in regenerating a tissue is to obtain the ECM of the tissue you wish to regenerate and then seed it with the appropriate layers of cells. The experiment is confined within an environment that mimics that of the human body until the cells populate the entire structure. Each particular tissue has specific needs in terms of cells and growing environment, but this general model has proven extremely successful in regenerating even the most difficult of organs, such as the heart, liver, and kidneys.

What has regenerative medicine accomplished so far?

Regenerative medicine has accomplished feats unimaginable just a decade ago. Below is a brief list of significant accomplishments in the field:

These feats of scientific progress demonstrate that Foregen’s mission to regenerate foreskins and reverse circumcision is possible. We know the technology exists. In fact, we have made tangible progress towards it. The main obstacle in achieving foreskin regeneration is aligning the overwhelming demand for a cure for circumcision with the correct scientific personnel. That is why Foregen was founded, and that is what Foregen will achieve.

So when is Foregen going to regenerate a foreskin?

Very soon, we hope! We already have the ECM from decellularizing animal foreskins.  The next step of our work, decellularizing human foreskin tissue, has been published in a peer reviewed research paper in SAGE Journal of Tissue Engineering, with very promising results.  This step was very important for creating a viable ECM that maintains the structures of the foreskin for regeneration.  This was a success and enables us to move on to our next phase, which will be to conduct a preclinical trial with an animal model to test for biocompatibility.  In the short term, we hope to fully regenerate these human foreskins. Once we have accomplished that, our goal is to advance onto human clinical trials as soon as it is safe to do so.

Will the new tissue have full function?

We believe so. In other regenerative surgeries, the new tissue reintegrates itself into the body, which recognizes the tissue as its own and does not reject it via the immune system as it would for grafted skin or transplanted organs. Those who have already undergone regenerative therapies have had amazing success. For example, those who have received regenerated bladders or tracheas, as mentioned earlier, now have fully functioning organs!  The nerve connections severed by the trauma of the surgery (in our case, circumcision) were reconnected to the body with the new implanted tissue. We expect Foregen to achieve similar results in our clinical trial.

What can I do to help?

We at Foregen appreciate your willingness to help us in our mission to apply state-of-the-art regenerative therapies to you or a loved one’s most intimate organ. We are moving as fast as we can, but to stay up to date with all of our advancements, please sign up for our newsletter in the box on the homepage. Also, we appreciate your tax deductible donations which fund our continued research.  Lastly, please share Foregen with your friends and family and over social media to help spread the word. By helping Foregen, you bring foreskin regeneration one step closer to becoming a reality.