A little-known research thesis on public health measures in Sub-Saharan Africa reveal tense disagreement over the role of circumcision in controlling HIV.

For more than a decade, the most powerful organizations in global health have pushed an American-style, universal War on the Human Foreskin, citing the scourge of HIV across the African continent as the target of its furor. Utilizing the notoriously controversial strategy of prophylactic, non-therapeutic circumcision, this effort has left its mark on millions of boys and men. Public initiatives, as they relate to combatting the HIV epidemic, have included policy directives and massive investments in the proliferation of male circumcision campaigns. These operations have promoted the circumcision of adult men in a voluntary capacity, semi-voluntarily for teenagers, and involuntarily for infants and children. Their influence has spread throughout Sub-Saharan Africa, the United States, and more recently, beyond. But how did this all begin?

On March 6th, 2007, a consortium of researchers and public health experts were convened by the World Health Organization (WHO) and the Joint United Nations Programme on HIV/AIDS (UNAIDS) in Montreux, Switzerland to discuss the results and implications of three, now infamous Randomized Control Trials (RCTs). These trials were conducted in South Africa, Kenya, and Uganda in the early 2000s, and sought to determine what relationship there may be between circumcision and the transmission of HIV from females to males during sexual intercourse.

Following the technical consultation, the WHO issued a public policy recommendation in which the importance of ramping up circumcision efforts in HIV-stricken African countries was stressed. Concurrently, the meetings were presented in the media as unanimous, and that the evidence pulled from the RCTs was authoritative and irrefutable. An article was published that same month with the headline Circumcision: New Weapon Against AIDS?, in which this new intervention was described as exciting and effective [1].

However, a widely-overlooked research thesis from Tammy Stainfield at the University of the Witwatersrand in South Africa paints a different picture of the Montreux meetings [2]. Published in 2008, this paper presents interviews Tammy conducted with twenty-one stakeholders who were there at the conference in Switzerland. Her research focused on the decision-making process behind the WHO and UNAID’s emerging new approach to the HIV epidemic.

“[This kind of meeting] is what covers their backs and that’s what allows them to move forward. It‘s what allows them to say to people who get up and say ‘no‘, who weren‘t involved in the process, that we have been through a consultation process with the world experts on this issue and the evidence says in their view this is the way to proceed,” he said.

Mary Crewe, the Executive Director of Pretoria University’s Centre for Study of AIDS, shared similar frustrations. “I have been at a couple of UNAIDS consultations which actually are not really consultations. They are processes where you are told, that this is what UNAIDS wants to do and wants to recommend and you get a chance to comment, but you kind of know that unless you are supporting them, your views are going to be regarded as dissident.”

Other accounts painted a picture of heightened, ideologically driven conflict during the meetings. Dr. Daniel Sidler, from the Tygerberg Hospital University of Stellenbosch, had this to say. “What has happened…is that this whole debate has become polarized, [and] it is not constructive…It should not be polarized, it should be constructive but critical, so that actually everybody who has got something to say is on board and hopefully finally one can come to a conclusion at the end and not that one labels each other with terminology, which is more ideological and discussed in a very polarized way.”

The agenda to promote circumcision also appears to have been driven by an atmosphere of desperation. Dowsett added, “people advocating that circumcision be added to the list [of prevention activities], argued that none of the other preventions methods are working or working fast enough to make a difference, and prevalence continues to rise. Therefore, there has got to be something to break the cycle.”

Warren Parker, executive director of the CADRE Centre for AIDS Development Research and Evaluation, felt that this initiative was yet another technology-based intervention that was destined to fail, unless the deeper societal causes were taken into careful consideration. “…the problem with something like circumcision [is] it is basically saying look don‘t change the dynamics of the society in relation to this disease don‘t explore the implications of the fact this disease exists for a societal level intervention, just add a technology, which is exactly why condoms didn‘t work. It is exactly why circumcision is not going to work,” he said.

Mary Crewe echoed a similar sentiment, saying “I think they endorsed it because again, they were looking for something, they had a lot of AIDS panic attacks around prevention and they believed that this is a way of getting to men who have been neglected traditionally in AIDS prevention work and this is a way that men could be brought into the whole system. I do not think they understand a lot of the social and cultural implications.”

When interviewed, Kevin De Cock, director of the CDC (Center for Disease Control and Prevention) country’s mission in Kenya, showcased this kind of desperation and insensitivity to social implications when he shared his view that, “the evidence is overwhelming that HIV is killing your society, it is not good for your culture to lose 20 to 30 years of life expectancy across your population, it is not good for your infant mortality to have trebled (or whatever it is) or to have an epidemic of orphans. It is not good for your society, now if you think that well none of that matters but my foreskin is much more important for my identity, those are the choices people need to make.”

In addressing these social implications, a chief component of the WHO’s strategy in rolling out these circumcision programs is the use of acceptability studies. These are surveys of the existing culture in a target country that are designed to understand how acceptable circumcision may be, what cultural obstacles are in place, and how to overcome them. Commenting on the feasibility of these, Dowsett added, “the complexity of the consequences of circumcision is far too difficult to put in a pamphlet, or a small briefing or an informed consent process…Basically, [they say] if I can show you that chewing gold is going to make you rich, will you chew gold? Of course you will. This is not an acceptability question; this is a loaded question.”

Dr. Sidler offered a similar critique, when he questioned, “What information has been given to these Africans and under what pretense were they actually willing to circumcise themselves?”

Apart from the soft effect of cultural insensitivities, Catherine Hankins, a Chief Scientific Advisor to UNAIDS at the time, felt that these shortcomings could have even more dangerous effects. “if they resume sex early and in many traditionally circumcising cultures, you are supposed to complete the circumcision process by having sex as soon as possible with a woman. In many settings there are specific women that offer this service to young men, so that‘s a way in which you can get infected. In the trials some of the men who resumed sex early (that is why we say wait until certified healing) - became infected, because they resumed sex early. I mean it just makes common sense if you have a partially open wound it is very likely that you will be able to get infected through it.”

Despite the evidential tension and disagreement that took place throughout the meetings in Montreux, the WHO and UNAIDs went ahead and published their recommendations, which were decidedly in favor of promoting male circumcision throughout Africa. Gary Dowsett viewed the way this research was presented to the world with trepidation. “Most people only have headline information about circumcision, about what these trials did and what they found and that‘s all anyone is interested in telling them. It‘s the press release and sound bite version of what these trials achieved, rather than the complexity of what these trials revealed, which was just how complex this issue actually is and how shaky efficacy actually is as a measure.”

Even from outside the meetings, the WHO’s findings were harshly criticized. The Australian Federation of AIDS Organisations was quick to dismiss them, writing in a July 2007 briefing paper, “correct and consistent condom use, not circumcision, is the most effective means of reducing female-to-male transmission, and vice-versa. Circumcision does not prevent HIV – in high prevalence areas it reduces the risk of female-to-male transmission. HIV acquisition rates were nevertheless high in both the circumcised and the noncircumcised groups involved in the trials” [3].

Others chose to criticize the science upon which these new recommendations were based. Doctors Robert Van Howe and Michelle Storms wrote in 2011 that by convincing men and women this surgical intervention is enough to prevent HIV, it encourages the more risk practice of abdicating condom use altogether. This is known as risk compensation and will, they warned, increase the spread of this terrible disease.

In 2013, Psychologist Gregory Boyle, Ph.D., published a comprehensive critique poking holes in the validity of the actual science underpinning the WHO’s uncritical acceptance of circumcision as a legitimate tool in the fight against HIV [4]. He pointed out that because the researchers behind three RCTs used by the WHO were themselves biased towards favoring routine circumcision, it very likely affected their work. For example, Dr. Maria Wawer and Dr. Ronald Gray from Johns Hopkins University, who carried out their trials in Rakai, Uganda, obtained over $28 million from the Bill and Melinda Gates Foundation to find out if circumcision would reduce the likelihood that HIV-infected men would transmit the virus to their female partners [5]. As it turned out, circumcision has the opposite effect. They found that it increased the rate of transmission by a staggering sixty-one percent [6]. This, however, was not taken into account by the WHO or UNAIDS.

Despite the objections of those opposed to the new agenda, at the end of the 2007 discussions in Montreux, an inevitable conclusion emerged. It was married to the idea that male circumcision was, “an efficacious intervention for HIV prevention,” and that it must be utilized as widely as possible, as soon as possible. Less than three weeks later, it became official policy of the WHO to promote Voluntary Medical Male Circumcision as far as possible across Sub-Saharan Africa [7]. Official publications and new articles popped up all over, touting this new intervention against the horrible HIV epidemic on the continent. Yet, observers have noted the significant bias in how these public relations campaigns have been carried out. As Dr. Sidler shared, “when you read all these publications they sound all alike, they all publish only literature or they only reference literature, which is suitable for their own opinion and leaves out any other literature, which is critical to their stance.”

[2] Stainfield, Tami L. “Why Did the World Health Organization (WHO) and Joint United Nations Programme on HIV/AIDS (UNAIDS) Endorse Male Circumcision as a Public Health Initiative for HIV Prevention in Sub-Saharan Africa?” University of the Witwatersrand, 2008.

[5] “Search for ‘HIV and STD Infection in Women in Rakai, Uganda.’” The Bill & Melinda Gates Foundation, 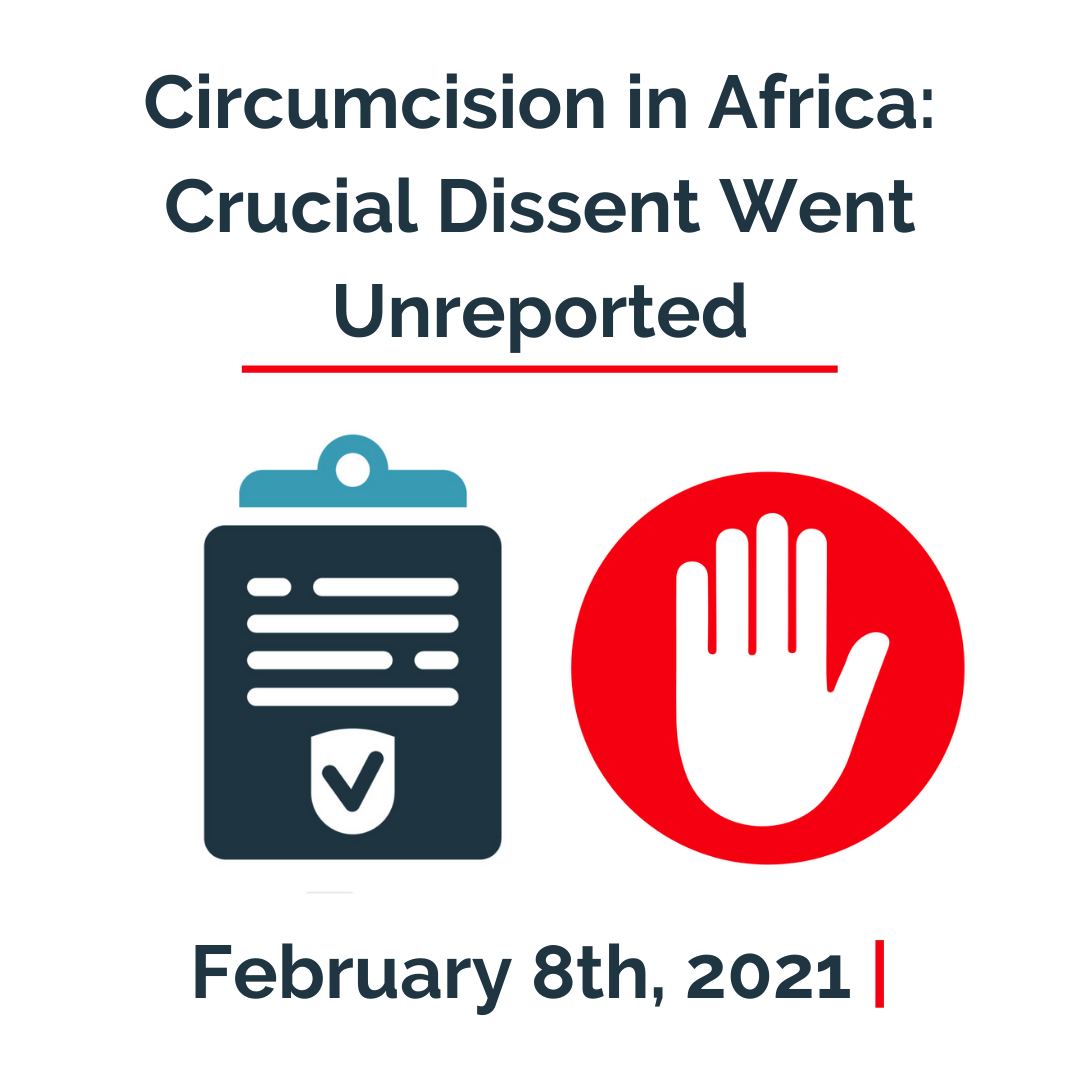