Following in the wake of mass circumcision campaigns launched by the World Health Organization, a handful of adroit, well-positioned entrepreneurs are poised to make a fortune.

As written in an official report put forth in March 2009, the WHO believed that a new generation of circumcision devices would be needed to meet the arbitrary demand for the cutting of millions of African men and boys. According to the authors, the “auto-destruction of single-use devices” would be of chief importance. Because the existing market mostly provided tools like the Gomco Clamp or the Mogen Clamp, both of which were designed for a long life-span with a repeating use-cycle, it was argued that these new single-use devices would be necessary to prevent the kind of issues that are associated with poor sanitation and substandard training of staff. They can lead to higher rates of post-operative complications such as infection and excessive bleeding.

Because of the time-sensitive nature of this unprecedented approach to the harrowing HIV epidemic, the report concluded that “considerable pressure to move rapidly to clinical testing of devices,” was needed to meet this new challenge. “To develop new or improved technology for circumcision, it was important to…develop faster, safer and easier procedures.”

Though a handful of devices already existed which fit these specifications, like the Shang Ring and Tara Klamp, it was made clear that new devices would still need to be developed [1]. At this point, a clarion call was sounded, and those with their ears to the ground and unscrupulous enough to make piles of money, did so, and to great effect. An insular web of conflicting interests have emerged in the wake of this new direction in Africa.

On July 15th, 2010, a patent was filed in the United States with the title “Circumcision device and method for mass circumcision”. The company filing it, Circ Medtech Ltd, is registered in the British Virgin Islands, a country which affords its native businesses many advantages, chief among them being zero tax liabilities and virtually no requirements for corporate reporting [2]. This has allowed the company to receive millions in government funds while avoiding all taxation responsibilities that exist back in the United States.

Before long, the company’s CEO Tzamaret Fuerst, spouse of Prepex co-inventor and Wall Street venture capitalist Oren Fuerst, was hitting the rounds of public venues in a marketing blitz for their new business venture. She appeared for an interview at the GBC Health Conference in 2012, delivered a speech before APAIC the following year, and then gave a TED Talk presentation in 2014, all for the purpose of highlighting the HIV problem in Africa and promoting their device as its optimal solution.

In the wake of this media tour, the Prepex became the first single-use device approved by the WHO for use in Africa. Orders were placed in fourteen different countries totaling hundreds of thousands, and glowing pieces were written in newspapers as prestigious as The New York Times. In fact, NYT’s science writer Donald G. McNeil Jr., who resigned this year after using a racial slur [3], wrote three separate pieces, each equally difficult to parse from a marketing blurb or an impartial reporting, touting its unique efficacy and safety [4].

Everything seemed to be going well, until the first complications were reported. In 2014, reports emerged of cases of tetanus, a potentially deadly bacterial infection that commonly develops when a wound is created in the skin. Just as Circ MedTech was getting ready to sign a major distribution deal with The Global Fund, an international public health non-profit, it was discovered that two patients had recently died from tetanus infections [5].

In response, the WHO made the impactful decision of mandating that any patient who seeks a circumcision via the PrePex device must receive a tetanus vaccine prior to having the operation [6]. Because of the difficulties in distributing such an injection throughout the remote towns and villages of the African Continent, this essentially took away the profitability of the PrePex device. The company fought back against the WHO’s decision, but was overruled. The vaccine mandate remained. This caused Circ Medtech to stop their PrePex operations altogether, which would have sold at approximately $20 per unit [7].

Another device created in the wake of the WHO’s call for novel circumcision tools, is called Unicirc. Interestingly, the list of inventors named on its patent include Dr. Cyril Parker and Dr. Elisabeth Parker, who are the original founders and owners of the Simunye Primary Healthcare clinic in Cape Town, South Africa. They also own the company that manufactures and distributes the device, Innovative Medical Technology (PTY) Ltd.

As per WHO guidance, paper-thin safety studies were conducted prior to pitching it to governments and funding agencies for purchase. One of these studies, published in the South African Medical Journal in 2013, concluded that it is “quicker, easier to learn, and is potentially safer than open surgical VMMC.” Astonishingly, the author, Dr. Peter Millard of the University of New England, thanks the Parkers for their assistance, noting that the circumcisions in this study took place at their clinic, Simunye Primary Healthcare. Although the paper states that it was “supported by Simunye Primary Healthcare,” it claims that the company had played no role in the design or writing of the study. Still, the conflict of interest is glaring when the inventors and manufacturers of the Unicirc are paying for its safety studies, and conducting them at their own facility. Dr. Millard, a long-time proponent of neonatal circumcision, went on to publish more studies touting the effectiveness of this device.

The Simple Circumcision Device, despite its banal name, has a curious background as well. The four inventors listed on its international patent, filed in November, 2013, are Dr. John Krieger, Dr. James Hotaling, Dr. Brian MacConaghy, and Dr. Francis Olson [8]. Dr. Krieger was a chief author on one of the three original RCTs (Randomized Control Trials) upon which the entire continent-wide mass circumcision campaign is based [9]. Additionally, the proof-of-concept research for their device, published in May 2014, includes each one of them listed as authors [10]. Their paper cites Krieger’s own research in Kenya to argue that circumcision is effective in combating HIV, and concludes, unsurprisingly, that their device is safe, effective, and acceptable for use in the field.

Those who have forcefully created this flawed and fervent fixation on circumcision as an epidemiological intervention against HIV, have also created devices to sell and profit from the solution, and are the same ones who study and declare the safety and effectiveness of those very tools they stand to profit from exclusively.

The incestuous nature of creating scientific justifications, implementing the mass-scale circumcision programs, and profiteering all throughout create an impression of an ideologically-driven agenda, powered by an insular, cultish furor. Those within the club must find other members to work with, because those who are uninitiated have already turned away from an agenda so flawed. This has been seen in how those with a pro-circumcision mindset rely on one another to publish studies on their own behalf, much less conduct business together.

Such revelations call in to question the validity of implementing mass-scale genital surgeries an intervention against HIV. Are these programs effective? Have they been introduced altruistically, or are there other financial interests at play? 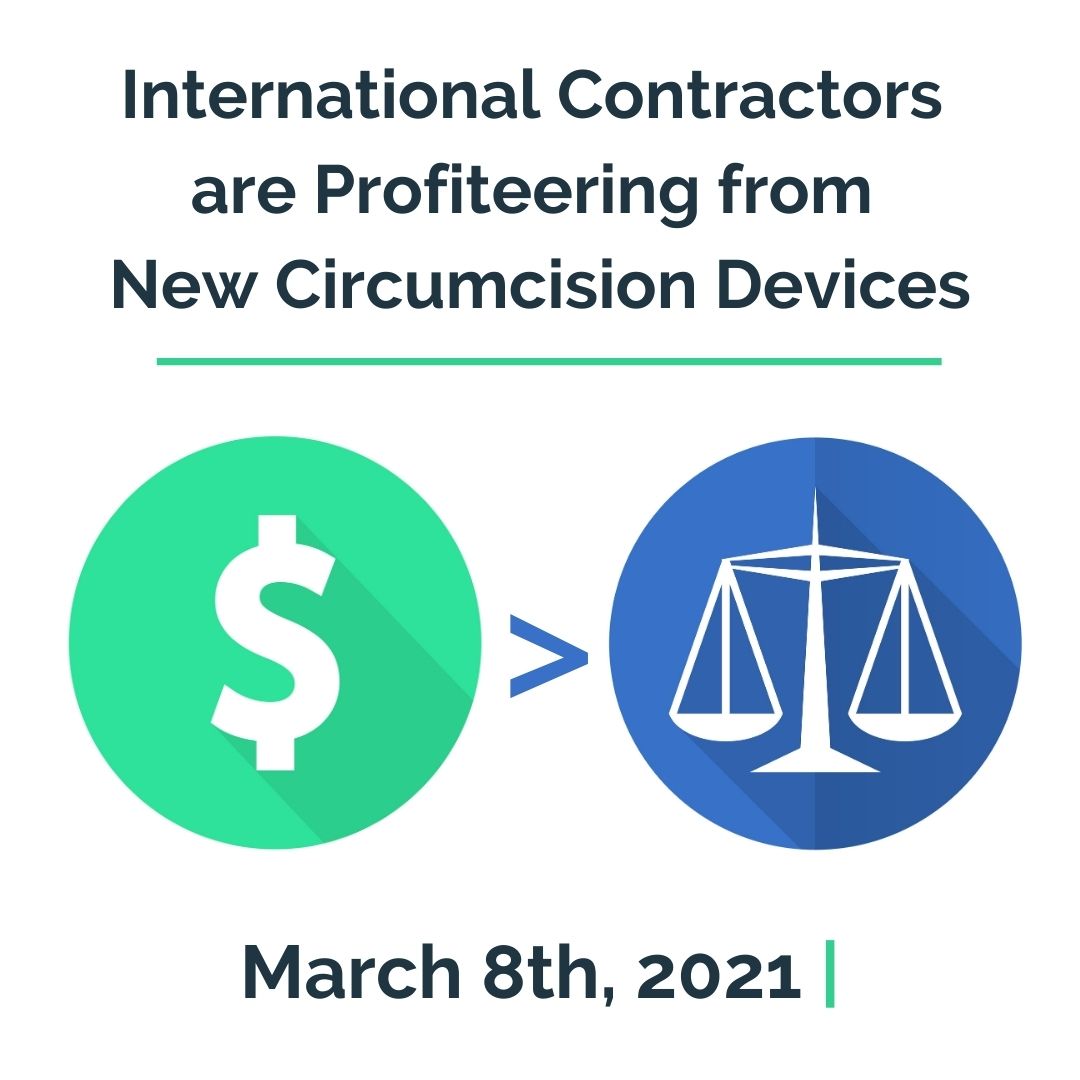