This is the official breakdown for Foregen’s stakeholders concerning our work at the South By Southwest Trade Show. All three of our staff directors, as well as Brendon Marotta, were present at the event, which lasted for three and a half days. We engaged with parties interested in both our general company and our scientific research.

The primary purpose of our work at SXSW was to establish connections for future operations, look for additional potential partners, and to augment the company’s physical presence. Secondary goals were to educate visitors and spread awareness about genital integrity and regenerative medicine. 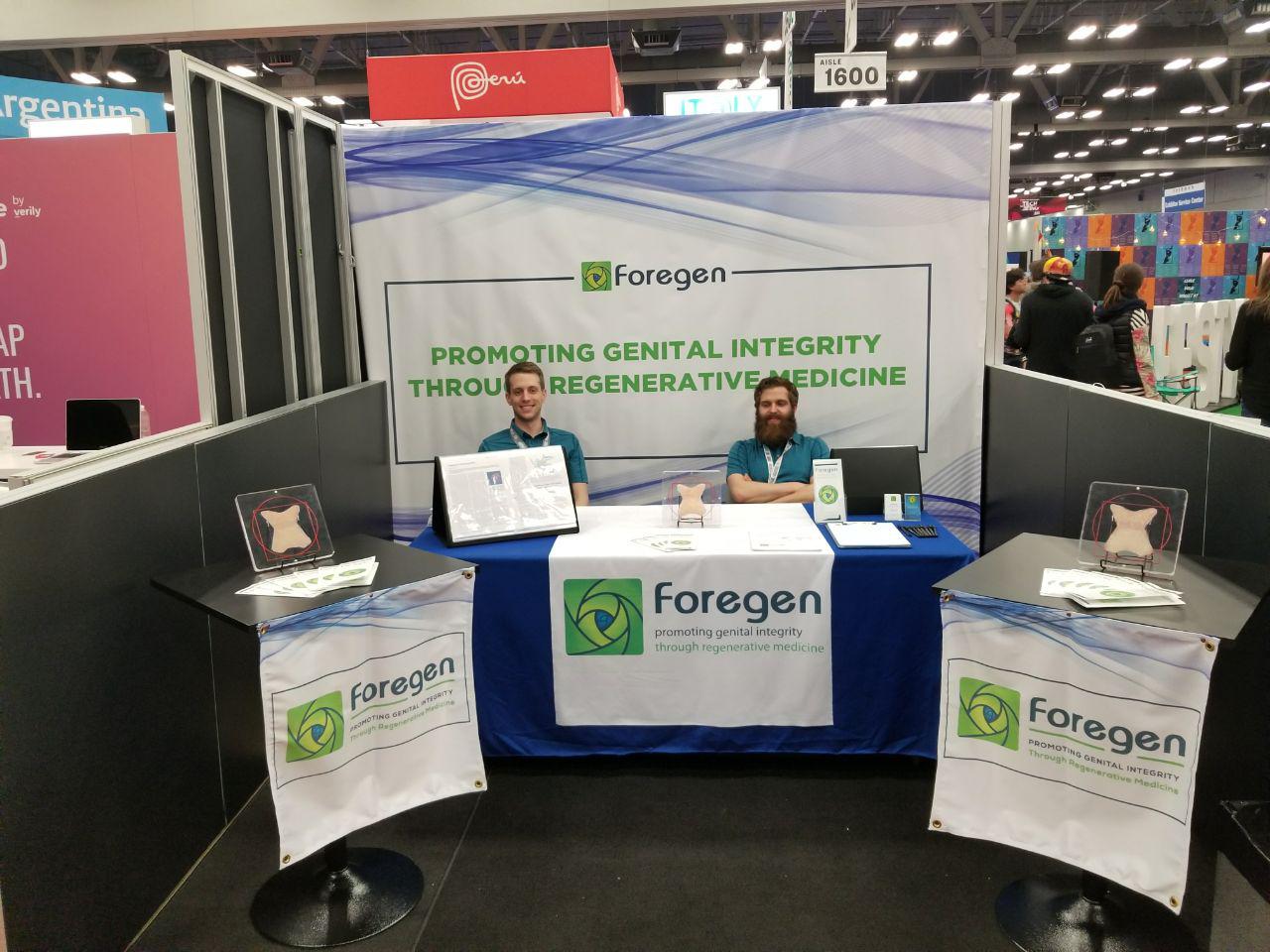 Our goals were clear and simple, and on all levels they were an objective success. We made several important connections, met with leaders in several relevant industries, and had positive interactions with professionals who could serve as key players when we expand further in the future. You can read more about our secondary goals and the success we had with them here.

Our immediate objective as a company is to move forward with our first publication’s peer-review process and continue with plans to further establish our company’s presence in the market. Our planned general objectives are to switch to for-profit by mid-2018 and continue long-term research phases thereafter. Our ultimate goal at this time is to eventually conduct human clinical trials, which was a major point of discussion during one of the meetings detailed below.

Over the course of the three and a half days we were at SXSW we had a number of interactions with professionals who we would like to explore working with in the future when we expand our operations further.

Prior to SXSW, we were invited to meet with the Belgian delegation representing Flanders Investment and Trade, an agency of the Flemish Government’s Department of Foreign Affairs. This was a very important proposal, and we met with them, discussing different things relating to the potential of conducting future work in Belgium, namely the potential to hold clinical trials there.  They offered to help coordinate and guide us with relevant labs and universities, given that Belgium conducts a lot of advanced medical work and has the infrastructure to support this type of biomedical research. While we are not yet at that stage, we were very happy to make solid connections and establish potential future avenues of research and development, which is important to form early on.

At the conclusion of our meeting with the delegation, we also talked with other individuals. We discussed our company and our goals with a private investor who we believe took some interest in our work as well as the CEO of a recruitment firm. In addition, we also spoke with others which you can read about here.

A Belgian molecular biologist stopped by our booth and was interested in the science and technology behind our project.  He gave us his contact information and in the future, we could potentially get in touch with him if we need additional scientific personnel.

Additionally, a consultant from a biotech firm with a degree in biomedical engineering stopped by our booth early in the morning and showed staunch support for what we do. We exchanged information and established a connection with him for his potential services in navigating the FDA and getting access to labs in the U.S.

Other press members included a Japanese reporter working for a business and investment media outlet stopped by our booth, asked questions, and took notes. Later, a Mexican reporter stopped by and was very curious what our work was all about. She took special interest in the science behind regeneration and appeared very supportive of the concept of regenerating the foreskin.

A man who we talked to ended up bringing back a show host with a camera crew. Our Lead Director, Tyler, gave them the basic rundown of Foregen, the anatomy of the foreskin, and how we plan to solve circumcision. Lastly, our good friend Brendon Marotta stopped by and visited our booth, featuring us in a live stream.

At SXSW we were invited to join another occasion by a woman who is an organizer for a different event in Austin, Texas.  This is another possible market for us to expand into, and something we’re researching since they have an annual attendance of over 10,000 people.

A man working as a Director for a Japanese consultant and business management firm stopped by. His specific department of the firm was not in biomedicine, but he took an interest in our work. He said he was interested in medical technologies and established a connection with us.

Furthermore, we met and had a productive conversation with the global lead of a major life science company concerning the process and science of our work. They made a connection with us so that we might discuss things further and explore what options we may have together.

Aside from the technological and scientific side of our interactions at SXSW, we also spoke with individuals who did work within the social and cultural realm.

One of these was a woman that came by who happened to be the founder of an organization promoting different events about sexuality and relationships. She was fascinated and intrigued by the far-reaching impacts of our work and the consequences of male genital cutting. Again, she expressed that it was the idea of why anyone would want to do this, and how good our work will be for everyone involved. She was very sympathetic and seemed happy to receive our information.  We’d like to talk with her again soon and see if she would be interested in potentially collaborating.

Later we talked with a woman who was the creator of an organization promoting awareness about the clitoris and its functions. She was very interested in our work and commented that it was fascinating to be on the other side of learning about functions of genitalia. She seemed quite shocked to learn about the different facets of this issue and how far-reaching its consequences really are.  Having a combination of teaching both the functions and anatomy of male and female genitalia is critical to our work and message

Overall we had a very positive and engaging conversation with both of these women, and we’d like to talk with them again in the future.

Based on the contacts and conversations we had at SXSW it’s clear it was a very productive event for us and one we would like to attend next year as well. We plan to follow up with the connections we made and people we met to explore our potential new options for both immediate and long-term work.  Thanks to all of you for your support in this project and to even more success in the future!