We are eager to share with you some of the great connections that occurred at Foregen’s recent attendance of South By Southwest Trade Show. The air was filled with anticipation on the heels of the recent publication of our first ever peer-reviewed research, and we are pleased to announce that we received a very positive reception that builds on our forward momentum.

Like last year, the primary purpose of our work at SXSW is to establish connections for future operations, look for additional potential partners, and to augment the company’s physical presence. Secondary goals include educating visitors and spreading awareness about genital integrity and regenerative medicine. 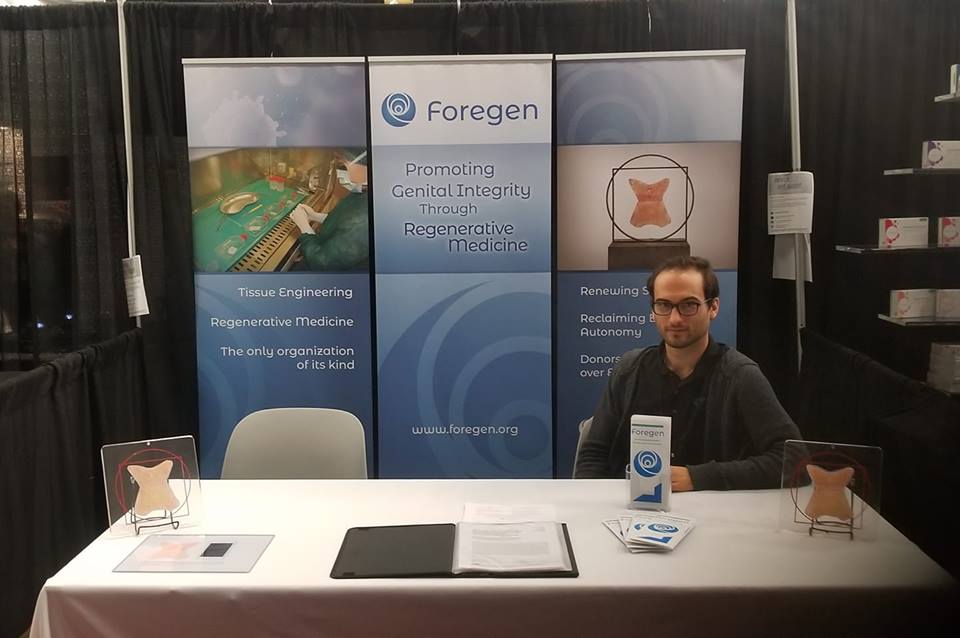 Over the course of three and a half days, we (Robert Pitts, Director of Events, and Jordan Arel, Podcast Host) shared our mission and its progress with many supporters old and new, as well as made several professional connections that could be important for Foregen’s expansion in the future. Continuing to build our supporter base as well as our professional network is critical as we continue on to animal trials and start thinking more about human trials in Foregen’s next phases.

On the beginning of our first day we met with a very interested team of two based out of China. The man said that because he was born in India, he was intact and already well aware of the benefits of having foreskin. The woman, after asking many intelligent, probing questions, explained that their firm has experience helping several companies expedite the approval process for medical procedures in the U.S., by working through labs in China. We exchanged information and look forward to the potential of greatly reducing the period of approval from the FDA once our procedure is ready.

We also met some supporters on the first day who were very pleased to see us at SXSW. It is always inspiring to talk with our supporters, and to hear firsthand in-person how we give hope that one day genital integrity will be possible for all men.

We talked with a woman who hosts a large annual wellness event open to the public in Austin. She said there is a section specifically for Sexual Wellness, so this is a strong potential for a place to share our full, uncensored message, and we are looking into having a presence there next year.

On day two we started the day off when our friend Brendon Marotta, director of American Circumcision, came by for a couple hours to take some photos, drop off some signed copies of his film, and help spread the good news about the benefits of the foreskin and its regeneration. He continues to be extremely supportive of our mission and we met with him again later on.

Soon after Brendon arrived, one woman came by and was very excited to hear that we are seeking to regenerate the foreskin. She explained that she hosts a podcast on sexuality and relationships, and that from her own experience it is far preferable for men to keep their whole genitalia, for herself, for his pleasure, as well as for the sexual aspects of a relationship. We got her information for the potential of a future podcast to expand our support base, and Brendon was also happy to share his documentary with her and discuss the potential of a future podcast.

A little bit later we had a woman stop by to ask us some questions about our company size and our current stage of progress as a company. She seemed to intuitively understand our mission. She confirmed that, indeed, she was a urologist, as well as working for a company that does translations for medical companies. She offered her information for when we’re ready to have our content translated into the many languages spoken by our diverse supporters, which already span over 80 countries.

Later in the day a sexuality-focused podcasting couple who Brendon had recently been a guest with came up to talk with him and with us. We had a great in-depth discussion about the harm of genital cutting and the benefits of foreskin, and this connection and podcast was another great place where we could potentially spread our message and gain supporters in the future.

On the third day, we encountered two mothers who had regrettably made the decision of circumcision for their sons, but were very happy to hear about Foregen.

The first was a Jewish mother. She said her son wanted her foreskin back, and she was very excited to be able to share this information with him. She seemed to see no conflict with her religion and was enthusiastic about sharing the information with her circle.

The second mother talked with us for a long period of time, and while she stated she had made the wrong decision before we even started talking, she was very shocked and saddened by the further information she learned. Thankfully, since her two sons are still quite young, she was grateful when we shared our absolute dedication to the goal of foreskin regeneration, and with it the hope that when her sons are at the age of sexual maturity they can potentially regenerate their foreskins and regain total sexual function. 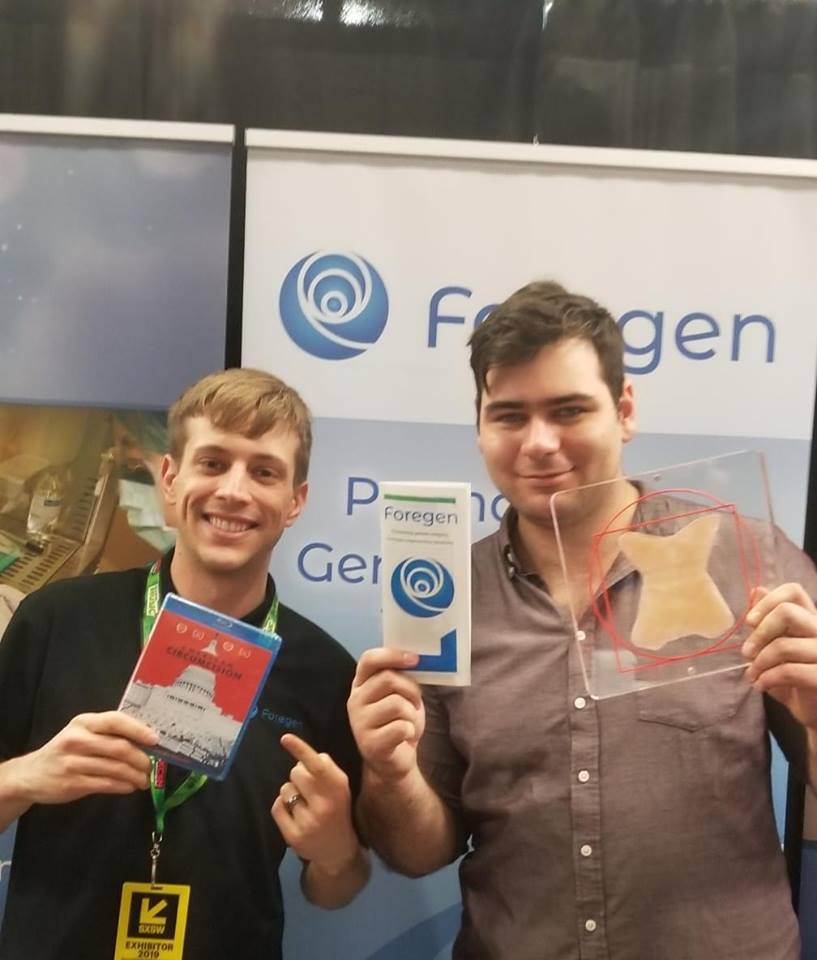 One great thing about SXSW is that we get to meet with people from all over the world. We had a great discussion with a man from Africa who was considering circumcision because he had heard that it reduces chances of HIV infection. We explained that the studies this propaganda was based on had deep methodological flaws and shared Brendon’s documentary which goes into this, as well as the many benefits of retaining the foreskin. He seemed to appreciate our desire to help him avoid a serious mistake and we were glad he was willing and open to take in the information and share it with others.

Another fun international interaction was with two German men who were equally astonished at the strangeness of circumcision and our ambitious solution. They took some pictures with us and a video where we explained the HuFo and our mission to regenerate the foreskin. With many interactions like these, we are excited to feel our message and mission continue to spread. Indeed, in the later days several of the people we talked with had already heard about us from discussions with other participants. It is a great rush to see the buzz Foregen is causing as we continue to expand awareness.

On the final day, the first person who came by was an older gentleman. As soon as we explained our mission to him his eyes lit up.

“So you’re saying it’s a good thing to have my foreskin?”
When we explained yes, the foreskin has many sexual advantages and many men today are actually trying to get theirs back, he was clearly surprised and delighted.
“And this whole time I thought I was at a disadvantage.. You guys made my day!”
It was wonderful to see him walk away with a greater lightness in his step, and a reminder that while our cultural bias against natural male sexuality has historically been pervasive, this can often be quickly shifted with factual, correct information.

In one of our final interactions we talked with a former engineer from the biotech giant Medtronic. As a former engineer, he was deeply interested in the science of what we are doing here at Foregen, and it was highly validating to see someone from a successful biotech firm so enthusiastic and supportive of our mission.

As always, we are grateful to all of our fantastic supporters and volunteers: events like this would not be possible without the generous support of all those who contribute their time, money, and energy to this mission. We understand that for many who follow Foregen, achieving genital integrity and the full sexual function and pleasure that come with it is a top priority. As we move on to the next phase of our research, we remain as dedicated as ever to returning the birthright of complete sexuality to all men who desire it.